“Visitors, you see this boat?
It used to be, it claims (I quote),
The speediest of craft afloat,
No ship that it could not out-soar
Either under sail or oar!” more…
The Caique, Translated from the Latin of Catullus by A. E. Stallings 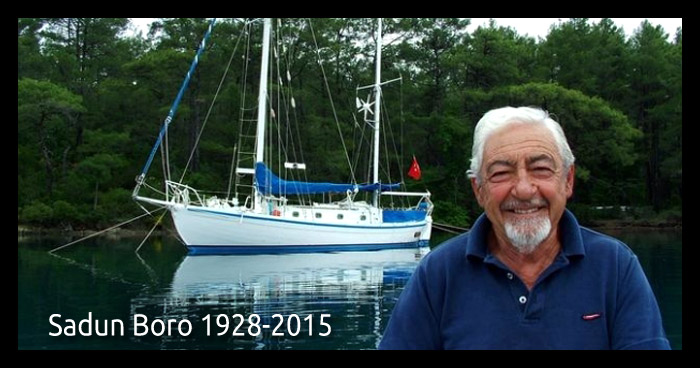 A sailing legend passes away at 87

Sadun Boro, the Turkish sailor, has passed away at the age of 87 while being treated for cancer in Marmaris.

Sadun and his wife Oda circumnavigated the globe in 1985 – 1988 in their 10.5m Atkin designed wooden double ender, the “Kısmet”. On board was also their cat “Miço”. At an age of no fax and internet they managed to send very frequent updates about their journey to Turkey, which were published weekly by the Turkish “Hürriyet” and were highly popular reading.

In 1980 he moved to Bodrum where he developed into the driving force behind forming the nature parks of Gökova and Göcek. He also wrote a comprehensive pilot book about the Turkish coasts and several memoirs about his voyages.

He was very instrumental in Turkey in forming an urge for the freedom of the high seas.

As a friend put it: “He literally put Turkey on the map. A man who left his mark.”

In early 2013, under the auspices of the Turkish Shipbuilders’ Association (GISBIR), leading yacht manufacturers, designers and engineers from Turkey’s wooden yacht industry came together to form the Kayık Association with two key objectives: To uphold the best traditions of Turkish wooden yacht production and to strengthen the industry’s position in the international boatbuilding sector.

After initial meetings with industry leaders, the Kayık Association is developing a strategy designed to a) underline the importance of wood as a yacht-building material, b) promote Turkey’s unique craftsmanship and accumulation of expertise and c) create new international ties.

“A Journey into Turkey’s Wooden Boatbuilding Industry” was the Kayık Association’s first venture and will be followed by training programmes featuring wooden boat production, organizing technical workshops, the development of production standards, restoration of old wooden boats, participation in local and international wooden boat races, publicity, promotion and the creation of publications about Turkish naval history.